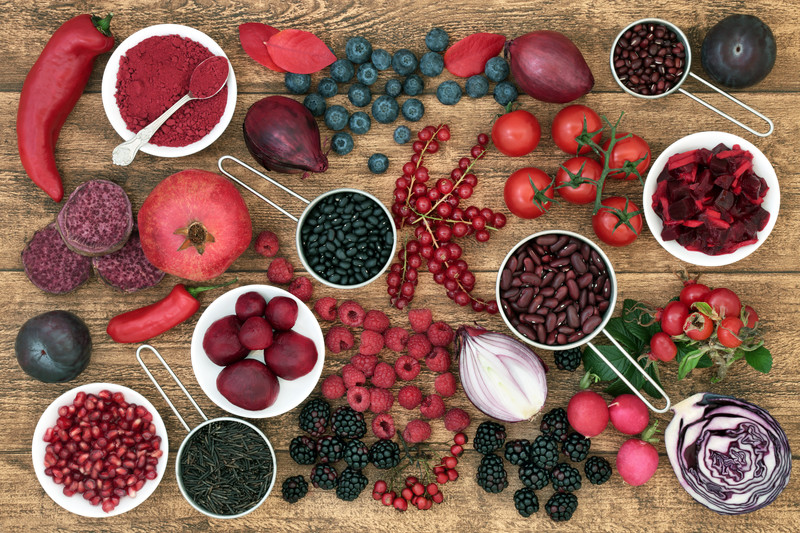 These plant pigments are more than coloring agents for fruit juices, wine, and other beverages. They also contain an array of health-promoting benefits.

Eaten in large amounts by primitive humans, anthocyanins are antioxidant flavonoids that protect many body systems. They have some of the strongest physiological effects of any plant compounds, and they are also things of beauty: anthocyanins provide pigment for pansies, petunias, and plums. (Anthocyanins are a separate class of flavonoids from proanthocyanidins, discussed in NSN 2000;5(6):231-4.)

Anthocyanins are the active component in several herbal folk medicines such as bilberry (Vaccinium myrtillus), which was used in the 12th century to induce menstruation and during World War II to improve British pilots' night vision. Scientists are now discovering how such anthocyanins work and are beginning to appreciate their health benefits.

Anthocyanins link with sugar molecules to form anthocyanins; besides chlorophyll, anthocyanins are probably the most important group of visible plant pigments. Anthocyanins, a flavonoid category, were found in one study to have the strongest antioxidizing power of 150 flavonoids.1 (Approximately 4,000 different flavonoids have been identified.)

The U.S. Department of Agriculture recently tested the abilities of berry varieties to protect against oxidative damage. In general, blackberries have the highest antioxidant capacity of any fruit. Different varieties of the same species have varying amounts of anthocyanins. The varietal cultivars with the highest antioxidative capacity against superoxide radicals, hydrogen peroxide, and other oxidants are hull, thornless, and jewel raspberries; early black cranberries; and Elliot blueberries.2

Anthocyanidins and their derivatives, many found in common foods, protect against a variety of oxidants through a number of mechanisms. For example, red cabbage anthocyanins protect animals against oxidative stress from the toxin paraquat.3 Cyanidins, found in most fruit sources of anthocyanins, have been found to "function as a potent antioxidant in vivo" in recent Japanese animal studies.4 In other animal studies, cyanidins protected cell membrane lipids from oxidation by a variety of harmful substances.5 Additional animal studies confirm that cyanidin is four times more powerful an antioxidant than vitamin E.G The anthocyanin pelargonidin protects the amino acid tyrosine from the highly reactive oxidant peroxynitrite.7 Eggplant contains a derivative ofthe anthocyanidin delphinidin called nasunin,which interferes with the dangerous hydroxylradical-generating system-a major source of oxidants in the body.8

Studies show anthocyanins' positive influences on a variety of health conditions. One reason is their anti-inflammatory properties, which affect collagen and the nervous system. Their ability to protect both large and small blood vessels from oxidative damage derives from a range of effects, including mitigating microvessel damage from high blood- sugar levels that cause complications in diabetics. By the same token, diabetic retinopathy, which damages eyesight, is caused by leaking, damaged capillaries.

Inflammation And Collagen: In the course of inflammation, enzymes damage connective tissue in capillaries, causing blood to leak into surrounding tissues. Oxidants are released and further damage blood-vessel walls. Anthocyanins protect in several ways. First, they neutralize enzymes that destroy connective tissue. Second, their antioxidant capacity prevents oxidants from damaging connective tissue. Finally, they repair damaged proteins in the blood-vessel walls. Animal experiments have shown thatsupplementation with anthocyanins effectively prevents inflammation and subsequent blood-vessel damage.9 Anthocyanins' anti-inflammatory ability has been shown to help dampen allergic reactions. In one study, Bulgarian researchers gave animals histamine and serotonin, both of which cause allergic reactions and increase capillary permeability. The animals were supplemented with a variety of flavonoids. Anthocyanins were found to have the strongest anti-inflammatory effect of any flavonoid tested.10 The Nervous System: Anthocyanins' effects on inflammation help explain many of their protective effects elsewhere in the body. The brain is particularly vulnerable to oxidativedamage. Test-tube studies show that nasunin protects lipids in animal brain tissue from oxidation.11 Peroxynitrite nitration of tyrosine residues in enzymes and proteins is believed to be a major cause of brain damage in neurodegenerative diseases and in brain trauma. Nitrated tyrosine blocks nerve growth-factor receptor sites, thus preventing new neural growth and inhibiting repair. By preventing tyrosine nitration, the anthocyaninpelargonidin may help protect against neurological diseases. Blueberry supplements have even been found to reverse age-related neurological deficits in animals.11 Large Blood Vessels: Anthocyanins' ability to counter oxidants makes them brawny atherosclerosis fighters. First, anthocyanins prevent a key step in atherogenesis: oxidation of low-density lipoproteins (LDL). Bilberry in even trace amounts effectively protects against LDL oxidation in test-tube studies. Researchers in a USDA-funded study concluded that bilberry is a "more potent" antioxidant than vitamin C or BHT, which is used as a preservative.2 In a human study conducted in Europe, researchers found that 55 women with intrauterine growth retardation (which manifests as a decreased rate of fetal growth), who took anthocyanins, experienced decreased oxidated LDL levels from 1,104 mU/ml to 726 in two months. LDL levels rose in the control group.12

Second, anthocyanins protect the integrity of the endothelial cells that line blood-vessel walls. Damage to these cells stimulates white blood cell migration to the area, intitiating athlerosclerosis and stimulating red blood cell migration. A study by the USDA at Tufts University in Boston found elderberry anthocyanins are quickly taken up into endothelial cell membranes where they prevent oxidation from hydrogen peroxide and otheroxidants. The researchers concluded that elderberry has "important implications on ... vascular diseases."5

One of the classic experiments on anthocyanins was conducted on hamsters in Italy. Ischemia-reperfusion was created in their cheeks by a brief clamping, causing white cells to clump onto the capillary wall and damage it. After several weeks of bilberry supplementation, scientists repeated the tests. This time, normal blood supply through the capillaries was restored, fewer white blood cells stuck to the vessel walls, and permeability was significantly reduced after reperfusion.9 Diabetes: Microvessel damage from high blood-sugar levels causes most of the complications in diabetes. Collagen proteins become linked with sugars, resulting in abnormal polymeric blood vessel collagen. In one German study, 12 adult diabetics took 600 mg anthocyanins daily for two months. Samples of their gum tissue were taken before and after treatment. After supplementation, abnormal collagen production was significantly decreased.14 Diabetes renders capillaries more permeable to large molecules than they should be. For instance, the protein albumin migrates into the spacebetween cells and is not adequately taken up by the lymphatic system. In a recent French study, researchers using an animal diabetic model found that those treated with bilberry maintained normal microcirculatory function including normal capillary filtration of albumin and its uptake by the lymphatic system.15

One of the most serious diabetic complications is retinopathy, which can cause blindness. Retinopathy occurs when the body attempts to repair leaking, damaged capillaries, but does so by overproducing abnormal proteins. Not only do anthocyanins prevent capillaries from leaking in the first place, but they also prevent abnormal protein proliferation. In one Italian study, 30 out of 40 people with retinopathy showed significantimprovement after taking 120 mg anthocyanin daily for several weeks. None of the control subjects improved.1G Eyesight: Anthocyanins may also improve eyesight by other mechanisms. In a French study conducted in 1964, researchers vision-tested 36 people for their ability to adapt to light and dark both before and after taking bilberry anthocyanins. For several hours aftersupplementation, their eyesight improved significantly, although the effect wore off within 24 hours.17 A recent Japanese study found that people taking 50 mg, but not 20 mg, black currant anthocyanins adapted better to the dark and had less eye fatigue than those in the placebo group.18

Anthocyanins may have other potential benefits for humans. In the laboratory, they have been found to inhibit some human tumor cells. Cyanidin and delphinidin inhibit epidermal growth factor receptor in cancer cells, while malvidin is less effective.21 Bilberry, traditionally used for ulcers, may increase the production of stomach mucus and protect the stomach from injury. In one uncontrolled Italian study, 10 men took 1,200 mg anthocyanins for 10 days. This increased their gastric juice secretion and mucus, while stomach acid production remained constant.22

A recent Austrian pilot study, in conjunction with the U.S. Air Force, found a proprietary, standardized, elderberry extract reduced stress-related parameters such as blood glucose levels induced by stress.23 Anthocyanins have received less attention than other flavonoids, despite their far- reaching effects. Because berries were such a large part of early diets, our ancestors probably ate far more anthocyanins than we do. Some researchers feel that, by comparison, we are deficient in anthocyanins. When people become aware of the antioxidant power of these compounds, perhaps we can remedy that deficiency. In the process, some of our popular foods may become even more enjoyable.

Marilyn Sterling, R.D., is a consultant to the natural products industry and contributing editor to Nutrition Science News. She is a part-time clinical nutritionist in Trinidad, Calif.